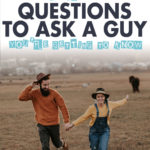 It can be fun, awkward, terrifying, exhilarating and amazing when speaking to a someone new.

Sometimes the conversation flows, other times for many reasons, it might be hard to think of some good questions to ask the guy you’re interested in.

If you find yourself stuck and not sure what questions to ask, not to worry.

We put together 21 questions to ask a guy, that will help you get to know him. Here will find questions that are funny, deep, introspective and best of all light.

You will get to know the guy better and get a general idea as to who he is.

1. Use One Word to Describe Yourself?

One word questions are always fun. By asking him to use one word to describe himself, you allow him to paint a picture of who he is, with one simple word.

A great way to flip it, is to ask him to use 5 words or a sentence to describe himself.  This can allow him to expand who he is a bit more, allowing more of his personality to shine.

2. Use One Word to Describe Your Perfect Girl?

Since we are on one word questions, you could swing the ball in his court and ask him in one word, to describe his perfect girl.

Words like fun, energetic, compassionate, shy or mischievous could all be thrown out. Whatever it is, it is a good way to get a glimpse into the type of person he would love to be around.

3. What are Some Goals You Would Like to Accomplish?

This is a good feeler question to get a glimpse into the man’s future. You can see if he is ambitious,k due to the lofty goals he has set for himself or if he is still trying to figure himself out.

You can ask him about personal or professional goals, even ones 5, 10 or 15 years into the future.’

4. What is Your Biggest Pet Peeve?

Pet peeves are a thing and everyone has that one thing that ticks them off.

By asking him what is his biggest pet peeve, you can learn what annoys him the most why it bothers him so much.

Be prepared to hear anything from people chewing with their mouths open to something more serious, like people who are late.

Whether you are texting or out on a date, food is a light and easy question to ask. In wanting to know what is his favorite food, you will be able to tell if he loves junk or is into something healthier.

Ask him why he loves that one food so much, is there a reason behind it?

A great way to mix this question up is asking him “If you could only eat one food for the rest of your life, what would it be?

6. What is the One Thing You’re Proudest of?

People love talking about their accomplishments and by asking him about his proudest moment, you allow him to show off a bit.

Prepare for the answer to be anything, from completing a major project he was working on, finishing a marathon or treating a random person to ice cream.

7. If You Could Meet One Person Dead or Alive, Who Would it be?

Quirky questions, can sometimes bring about quirky answers. You can expand the question some more, by asking him why he chose that person.

The answer you get with these questions, might be a surprising.

8. If You Could Have One Superpower, What Would it be?

Imagine if we had one superpower, life would get a bit more interesting. Asking him about his superpower is an entertaining question and be prepared to laugh, because he might come with something totally outlandish.

9. What Is the Funniest/Most Embarrassing Thing to Ever Happen to You?

Laughter is always good for the soul and asking him what is the funniest thing to ever happen to him, you get a hilarious or even outrageous story or two that might have the both of you in tears.

Great way to break the ice even more, especially if it is something embarrassingly hilarious.

10. What is Your Biggest Fear?

We all have different fears and asking a guy his, is a good way for him to open up to you.

For some, it is sometimes a deep question, but depending on his comfort level, you might learn some secretys that he sometimes keep guarded.

11. What Animal Best Describes You?

Some guys tie their personality to animals and by asking which one best describes him, you can see who he is as a person.

When it comes to guys, most of the times, you can’t go wrong by asking them a sports question. Ask them about their favorite team or player. If you are a big sports fan yourself, you could steer the conversation into a whole other direction.

13. Do You Have Any Hidden Talents?

This is a pretty fun question to ask, as while we all have some type of talent, it’s the hidden talents that are the most surprising.

Depending on what the talent is, the guy could give you a quick demonstration, which lightens the mood and sets the stage for more relaxed conversation.

When going through this thing called life, we are guaranteed to have a lots positives and negatives along the journey. By asking the question, “what’s your biggest regret?” You get to see a significant event, that could have a big impact on the guy’s life.

The good thing about regret, as painful as it is, is that the person eventually moves on and it serves more as a teachable moment from the past.

You get to see if he is a man who loves to travel and explore new places, based on his answer to the question, “what’s the best place you’ve visited?”

Depending on his answer, you might get a ton of fun stories and if you are a traveler yourself, you can also talk about your own experiences.

16. What was Your Favorite Childhood Toy/Memory?

Taking a guy back to his childhood, is a great way to get some insight into his overall life. By asking him about his favorite childhood toy or memory, you often can bring him back to a happy place, when life was much easier and innocent.

Take note of how he talks about his favorite toy/memory as a child. Those moments played a part in the person he is today.

Another deep question to get the momentum going, is asking him what he looks for in a woman? You get to see what he values in a partner, what qualities they should have and how they measure up against what is the norm.

18. What’s Your Biggest Turn-off in a Partner?

19. If You Won a Million Dollars, What Would You Do?

What if questions are always a fun way to keep the conversation going. By asking him what he would do if he won a million dollars, allows his imagination to run wild.

Take note of how he answers. Someone who runs to buy a Lamborghini and live excessively …Remember it is a fun question, so don’t be surprised with the answers.

20. What is One Thing Many People Don’t Know About You?

A deep question that could go different ways. If he is guarded he could give you an on the surface fact. If he likes you and want’s to open up some more, he could tell you one of his secrets, that a few or no one knows.

Asking him to describe his perfect weekend allows you to get a glimpse into his world, with the free days he has on a weekend.

Is he into activities, a homebody, has errands to do or likes to sleep in? You can pick up small clues along the way, which