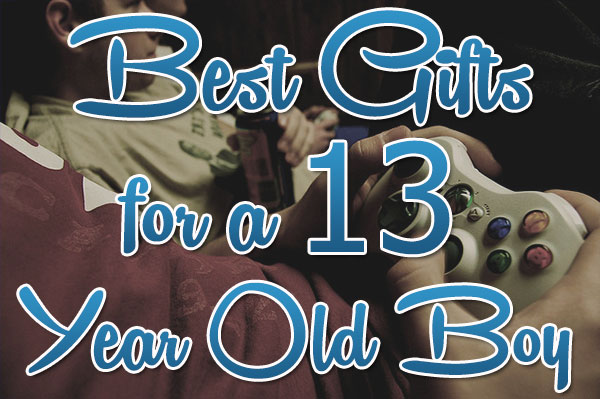 If you are looking for gift ideas for a 13-year-old boy, you really do not have to worry, as they are pretty easy to please. When it comes to gift options, there’s so much to choose from. It really depends on what this teen has an interest in and what kind of things you think he will like.

It’s a given fact that the majority of 13 year old boys are obsessed with video games.  Whether it is PS3, Xbox and to some degree the Wii series of systems, whatever it is, if given the chance they would be on these video game systems all day.

The PS3 is a highly rated game system and it is one of the most popular on the market. This system features a lot of exclusive games that are appealing to 13-year-olds. The games are more mature

The Microsoft Xbox 360 is another popular option amongst teenagers.

One of the main demographics of handheld videogame system such as the 3DS or PS Vita is 13 year old boys.  These systems are perfect for them simply because they are portable and this fits into the lifestyle of the ever on the go teenager.

Wii U or Wii

The Nintendo Wii U or Nintendo Wii are other video game system options, however you might find that some 13 year old boys might be turned off by them. They might tell you that the system is for kids and they do not have some of the popular titles that can be found on other system such as the PS3 or Xbox. They are still a good buy and you can expect

Boys this age are going to absolutely love their video games, but they will also go crazy for the latest technology gadgets. There are a lot of options to choose from, but the best bet is to with something that you know they want or would like.

Will that 13 year old love a tablet as a gift? I can be you $100 that he will. You cannot go wrong with a tablet, simply because it can do everything. He will be able to surf the internet, watch movies, listen to music, play games, take pictures (depending on the type) and so much more. It is a good gift to have, especially if he is into techy gadgets.

Ipad Mini – The Ipad Mini is a smaller and stripped down version to the Ipad. It does everything that it’s big brother does, the only thing it is smaller, cheaper and lighter.

Ipad – The Ipad is a beefed up version of the mini. It is more powerful and bigger. It is also more expensive.

The Kindle Fire HD is the tablet offering by Amazon. This is a very popular options, especially when compared the Ipad, simply because it is cheaper and it is capable of delivering a lot of bang for the buck. This tablet will allow you to read kindle books, watch movies, listen to music, play games and much more. This tablet is tied into Amazon.com and if you sign up correctly, this is a pretty good deal.

The Google Nexus is a 7 inch tablet that is gaining popularity in the tablet market. One of the reasons why people are gravitating towards it is because of its cheap price. Aside from being pretty reasonable, this tablet is also very powerful. It will be running the latest Android operating system and you will be able to do everything with it, like the tablets we mentioned above. This is a more all-round tablet and I am pretty sure the 13-year old kid will enjoy this immensely.

All the tablets above are great to have, but if you are looking for something a bit cheaper, then you can look at the plethora of Android tablets that are available. These tablets are pretty cheap and they will do all the necessary things from playing games, movies, music and surfing the internet. The downside to these cheap tablets is that you get what you pay for. They may be crafted out of cheap materials and some of them feel like something that will fall apart if used too much. The Android operating system will generally not be the latest, so the tablet might feel antiquated when it comes to certain things. However it is still a good buy, as it is cheap and will be able to perform.

Even though everybody is going with

Netbooks – Netbooks are the smaller equivalent of the laptop. They are essentially used for surfing the net, watching movies, listening to music and word pressing. The reason why they are so popular is that they are not very expensive and it is essentially a mini laptop. If the kid needs a device to type up his homework or just to surf the net, then this is a good inexpensive option.

Laptops – Laptops can be a good gift idea if you feel the teen needs a computer with more power. Aside from doing the regular stuff such as surfing the net and watching movies, this is a good gift, especially if he is interested in programming, graphic design, 3d design, video editing or music creation.