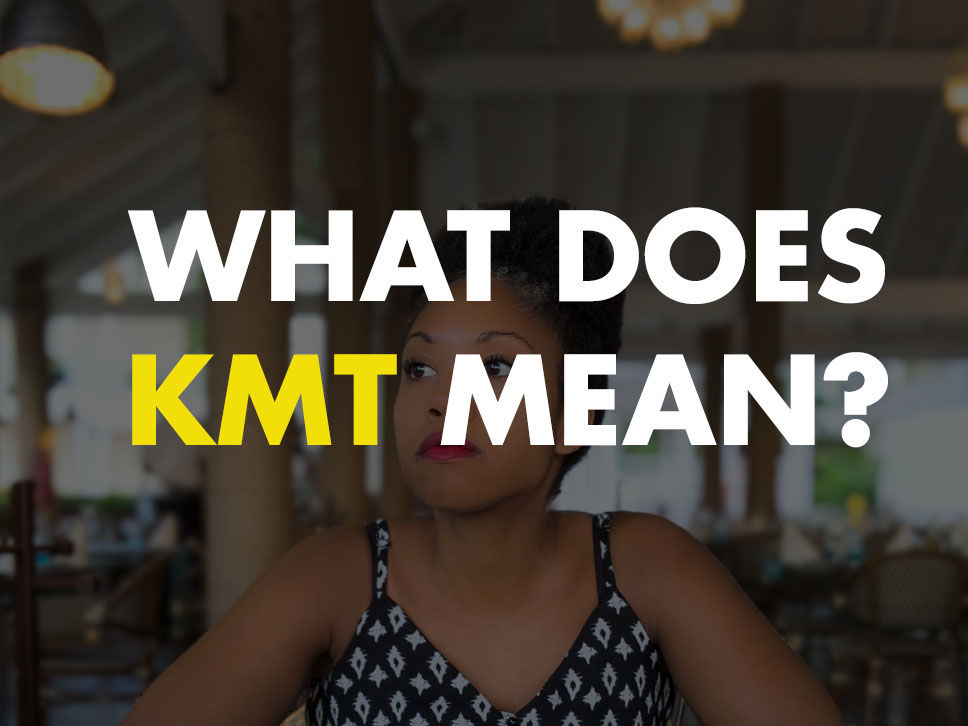 KMT is a unique acronym. Whereas most common acronyms are based on standard English words and phrases, KMT is derived from Jamaican patois. Patois is an original dialect spoken by people in the Caribbean island. In patois, KMT’s literal meaning is “Kiss Mi Teeth”.

Now, the act of kissing one’s teeth is a very dramatic mouth gesture used to show annoyance or strong dislike.

The English equivalent of the action would be to hiss ones teeth.

N.B. When someone hisses their teeth, they generally produce an extended ‘S’ sound, usually accompanied by a distasteful facial expression.

Fun fact: The sound made when someone hisses is actually characterized as sibilance (a consonant sound that’s pronounced when a stream of air passes through teeth that are touching or close together).

How Do You Use KMT?

The acronym KMT is most commonly used to show annoyance, anger or disregard. This can be towards a person, thing, action or statement made by another party.

KMT is also used as a response to to something that the user is in disagreement with and wishes to show disapproval of.

Whereas other acronyms are usually popular among a particular demographic of people, KMT seems to be a truly universal acronym that transcends age ranges and genders.

Rise in the use of the Word on Social Media/Texting:

Like popular acronyms like bae, AF and smh; KMT has grown in popularity over the past two or three years as more Jamaicans and people of Caribbean descent have become active on social media platforms. Its use is mostly observed among persons of African or Caribbean ancestry.

KMT is usually written in capital letters, but in some cases it is written as lowercase “kmt”. This, however, does not alter the meaning when it’s used in text communication.

No one really knows when KMT became popular as a shortened form of the popular Jamaican response “kiss mi teeth”. Frankly, there is very little evidence to point to who first coined the term, where or when it was first used in this context. KMT is just one of many popular acronyms that just seemed to appear out of thin air and was quickly adopted in messaging and social media statuses.

Despite where or who the term came from , it’s definitely one of the most popular acronyms used across the ethnic populations on the inter webs in 2019.

We’ve already established that KMT is an emotionally charged reaction in the physical sense. In the written form, however, the aggressiveness normally associated with the act is somewhat tempered.

In the written form, KMT is generally used as a stand alone statement. It can however be used as part of a sentence as well.

For example, someone might send “KMT” as a response to a friend canceling plans for the night. In this case, KMT is used as a stand alone statement to express disappointment.

In another instance, a social media user comment “I’ve been waiting in this long line for an hour. KMT.” In this example, KMT is used as a part of a sentence and used to express annoyance at the poor customer service and extended wait time being faced.

A quick search on any social media platform will show several comments including the acronym KMT.

It’s important, however, to carefully observe the context in which KMT is used, as the acronym has many older applications in the field of Chemistry and even in the Chinese government hierarchy.

What Does BSF Mean? What Does “AF” Mean?