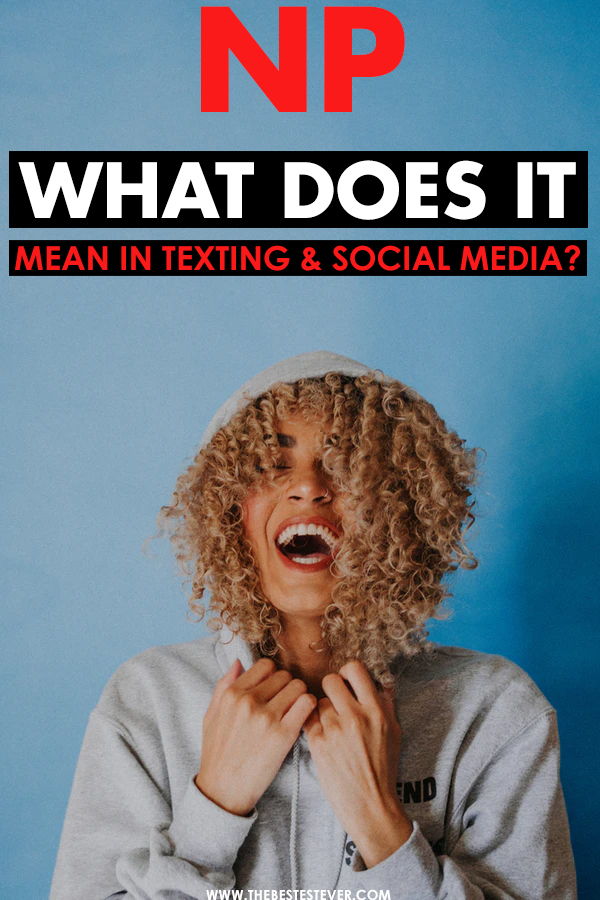 A quick online search for NP without a given context will reveal that there are tons of meanings for the acronym. In internet message, social media and other online spaces, however, the abbreviation has a specific meaning

What Does NP Mean in Text, Chat, Slang & Social Media?

NP is short for “No problem” or “No prob”. It is a well-used acronym, especially by teens and younger adults who spend a lot of time navigating online spaces.

Like many other shortened variations like “bae”, “SMH” and “BSF”, which developed for text language, NP has increased in popularity and usage in the past few years as social media and instant messaging platforms expanded.

NP is usually written in capital letters, but in some cases it is written as lowercase. This, however, does not alter the meaning when it’s used in text communication.

NP is not just used in English. Spanish speakers also use the acronym, but in their case the literal translation is “no problemo”, which is the same meaning as the English version.

Fun fact: NP has a lesser known meaning that may also be applicable to texting in some cases. In text based chat rooms, the word can be used to mean “now playing”, to announce what music you are listening to in the chat group.

How Do You Use NP?

Rise in the use of the word:

No one really knows when NP became popular as a shortened form of no problem. Neither is there any substantive data to prove who first coined the term. It’s simply one of those acronyms that popped up out of nowhere and became a mainstay in messaging and social media statuses.

Despite where or who the term came from, it’s definitely one of the most popular acronyms used across the internet in 2019.

As earlier explained, NP is essentially a replacement for the words you’re welcome and would function similarly in its application to real life situations.

For example, a friend who spent the night hanging out with another girlfriend might text her saying “I’m so happy you invited me out! I had a great time! Thank you!” The second friend responds with a quick “NP” indicating that her friend is welcome.

Another instance might see the word being used to indicate that there was no difficulty in the task carried out and that the person is always willing to help. For instance, a messaging exchange could start out with the text “You saved my life man. I don’t know what I would have done without you tonight!” To which the second party might respond “It was NP man.” The word in this case sums up the fact that the friend is always willing to play a supportive role.

What Does “AF” Mean?

What Does BSF Mean?

What Does KMT Mean