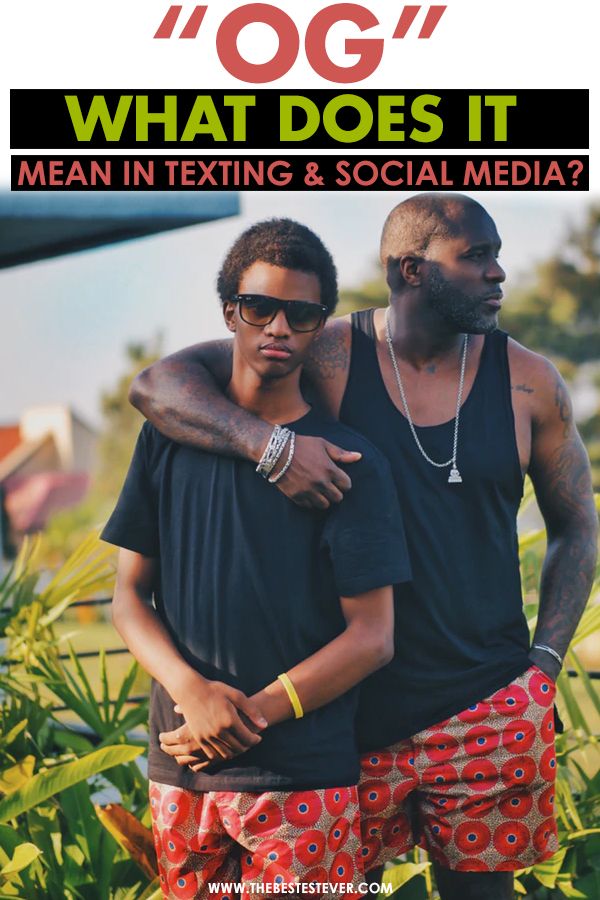 OG is one of those acronyms that has been around for a really long time. The term has long been associated with rap, hip hop and underground gangs in the United States. It’s possible that it actually pre-dated the texting and internet era and was brought over those platforms as more and more people got on them. While the essential meaning of OG is understood by people across many demographics and pretty much all walks of life, not many people know what the actual letters in the acronym stand for.

What Does OG Mean in Text, Chat, Slang & Social Media?

The most common accepted meaning of the letters in OG is Original Gangster. But, as text messaging and instant messaging has evolved, OG, like popular words bae, smh and NP, has also become a shortened form of the word Original.

With the older definition of OG applied, it essentially means that a person or thing has a classic style or way of doing things that was not mainstream.

With the new meaning applied, O.G. can be used as a reference to authenticity in a person or thing.

Fun Fact: There is a popular strain of cannabis that’s known as OG Kush. The origin of the name for the marijuana strain is debated, but according to the Amsterdam based seller which markets and promotes the brand, the strain originally started out with a whole different name, but was renamed OG Kush by a LA rap group Cypress Hill. In this case, the 1990s Cypress Hill group was using the term O.G. to mean exceptional and one of a kind.

How Do You Use OG?

The acronym OG is used in pretty much the same way that the word original would have been. OG while most commonly used to define a person, can be applied to anything that is deemed to be the best of something.

OG is one of the acronyms that is popular among all demographic groups on and off the internet. Due to its gang origins, however, The word is oftentimes used in reference to anything gang or hip-hop related.

OG can also be used in a sarcastic or ironic way to describe people who are the total opposite of the stereotypical gangster. For example, a nerdy kid might be jokingly labeled an OG.

Rise in the use of Word:

OG is a very popular acronym. If one were to carry out a random poll, it’s likely that the majority of respondents would be able to indicate the meaning of the phrase or at least a general understanding of it.

In its modern usage, OG has come to be a cool way to indicate the highest level of respect for someone who is thought to be a veteran in any facet of life, but many believe its true origins lie in gang culture. Research indicates that self-proclaimed former gang members Steve Champion and Anthony Ross claim the term was first used in the early 1970s by the United States Los Angeles-based gang The Original Gangster Crips. The men further claim that the term “original gangster” or “OG was derived from the gang’s name and stood for “we’re the first.” They say Crips members would use the OG acronym as shorthand when writing which part of the gang they belonged to.

Legend further has it that as the LA Crips gang expanded in the 1970s, with new recruits joining from different gangs, the definition of began to change. The term then became synonymous with someone who was deeply devoted to their subset gang, and younger members of the gangs allegedly began to use it in reference to the elders. The term became so popular that even rival gangs, and eventually others not affiliated with the gang scene, started using it.

The presence of OG can be observed in mainstream music and commercialized rap music from as early as the 1980s.

We’ve already established that OG is a term used to characterize authenticity and respect.

In this regard, it can be used to describe sporting legends like Michael Jordan, Usain Bolt, Muhammad Ali and others who are undisputed champions in their fields. In this respect, OG is used similarly to the acronym GOAT (Greatest of All Time). So instead of saying “Usain Bolt is the GOAT in track and field”, one might say “Bolt is the O.G. of track!”

The word can also be used in a less serious and banter-like way for someone who does quirky things. For example, a friend who is able to catch sweets with his/her mouth, could be jokingly called an OG.

One well known example of OG in the mainstream context is in famous rapper Ice-T’s single album title “O.G. Original Gangster”. The single of the same name was heavily rotated and secured a number 7 peaking spot on the 1991 Billboard rap charts.

A search for the hashtag OG (that is #OG) on Instagram will reveal more than 4.8 million posts made worldwide. The featured posts include videos of elite athletes, unique sneakers and other products, amped up vehicles and bikes, and some of the world’s greatest singers, actors and other performers. It also includes funny videos from reality TV shows and kids doing silly tricks.